The initiating moment for the BetaCodex Network was a work gathering of Beyond Budgeting Round Table directors in Basel, Switzerland, in December 2007. Before and during that meeting, a bold new vision and mission for the BBRT were drafted. The vision was quite simple, really. It said: “The Beyond Budgeting model is the standard management model” – meaning that the movement would aspire to turn its model into the natural choice for organizations of all kinds, everywhere. That made sense to everyone at the meeting: The vision was bold. It was clear. It was “true”. Several more great ideas for the movement were dashed out during that session in Basel. But when the group voted on installing the new vision and the new mission statement, both were rejected by a majority within the group, due to personal reasons and preferences.

The meeting resulted in the immediate retirement of Robin Fraser from the BBRT. Robin had been one of the “founding fathers” of the Beyond Budgeting movement, back in 1998, and he was a leading figure in the movement´s transformational wing. The other one was Niels Pflaeging, who had served as BBRT director since 2003. Niels and Gebhard Borck, who had also taken part in the Basel meeting, opted for another direction than Robin Fraser: Not “out”, but “in”. They wanted this occasion to be the starting point of something new, energizing, and exciting. In response to what had happened at the meeting, they decided, together with Valérya Carvalho, to pick up the challenge of the freshly developed vision and mission statement, and initiate the foundation of a new network, separate from the BBRT. International and more welcoming. It would be an association that would not just “talk” Beyond Budgeting, but walk the talk. A network that would hat would not just be about conversation, but, instead, “make it real!”. Initially, this new network initiated by Valérya, Gebhard and Niels would be called the Beyond Budgeting Transformation Network, or BBTN.

Between April and December 2008, Niels and Gebhard worked on generating initial content for the network, based on their previous research and consulting work and focusing on what they thought could be starting points for positioning the network. This resulted in the first five network white papers. The three founders also tried to solve the riddle of how to take the model open source. In late 2008, the three arrived at the conclusion, together with help from a few peers, that all commercial interest should be strictly and permanently separated from the network. Finally, in 2009, the new name and brand for the model and the network were established. Plans for a rather complicated, multi-tier membership concept was abandoned. All ranks, titles or positions, such as the title of “director”, were scrapped. The network, if it were to be truly open source, would not have any formal hierarchy. Its finances would not be based on membership fees, either.

The first web portal of the network, designed by Valérya and Niels, was launched at the end of 2009. It featured a social network community forum, which was eventually moved to LinkedIn, in 2017, and it showcased a great deal of BetaCodex content. The publication of the BetaCodex Network white papers is especially noteworthy, in this context: The white papers (14 in total, over the first 10 years, plus two “special edition” papers) have attracted over half a million views so far. Since 2014, some of the books published by BetaCodex Network associates became best-sellers: notably Organize for Complexity (2014 by Niels Pflaeging, published in 4 languages), and Komplexithoden (2015, by Silke Hermann and Niels, German only). During the years 2011 and 2015, key “Beta” concepts such as Change-as-Flipping and OrgPhysics were first idealized and developed by Silke and Niels.

The array of available content was broadened further with the launch of the current web presence, which went live in early 2018. This website was developed by Sebastian Blum and Bjoern Janssen, together with Niels. A Slack presence and a discussion forum on Slack were created, in order to make network activity more visible, and to nudge it further into truly becoming a movement.

The years 2018 to 2020 (when this update was written) brought a new dynamic to the network. More people became actively involved. BetaCodex online groups on LinkedIn and Xing continued, but Slack became the platform for interaction and joint work. New Twitter accounts for the network were established, as well as a BetaCodex Network YouTube channel. We now have a bunch of local meetup groups, and two online meetup series happening (one in English, one in German).

A significant review and update of the 12-item BetaCodex itself was undertaken by Silke Hermann and Niels Pflaeging in 2018.
At the same time, several new, BetaCodex-based social technologies were published by Red42 under open source licenses. Chiefly: OpenSpace Beta – for very fast, robust organizational Beta transformation. Cell Structure Design – for decentralized organizational design, leaderships and consistent self-organization. And LearningCircles by Red42 – for organizational learning on the edge of org development. White papers on Very Fast Organizational Transformation and Change-as-Flipping were published in 2019. The first Beta transformations using the OpenSpace Beta approach, consistently, happened in the same year. More and more companies are now referring to the BetaCodex as their “design principles.”

An overview over the history of the movement – from its beginning in the Beyond Budgeting Round Table until today – can bee seen in the following illustration. Please mention betacodex.org as a source when sharing. 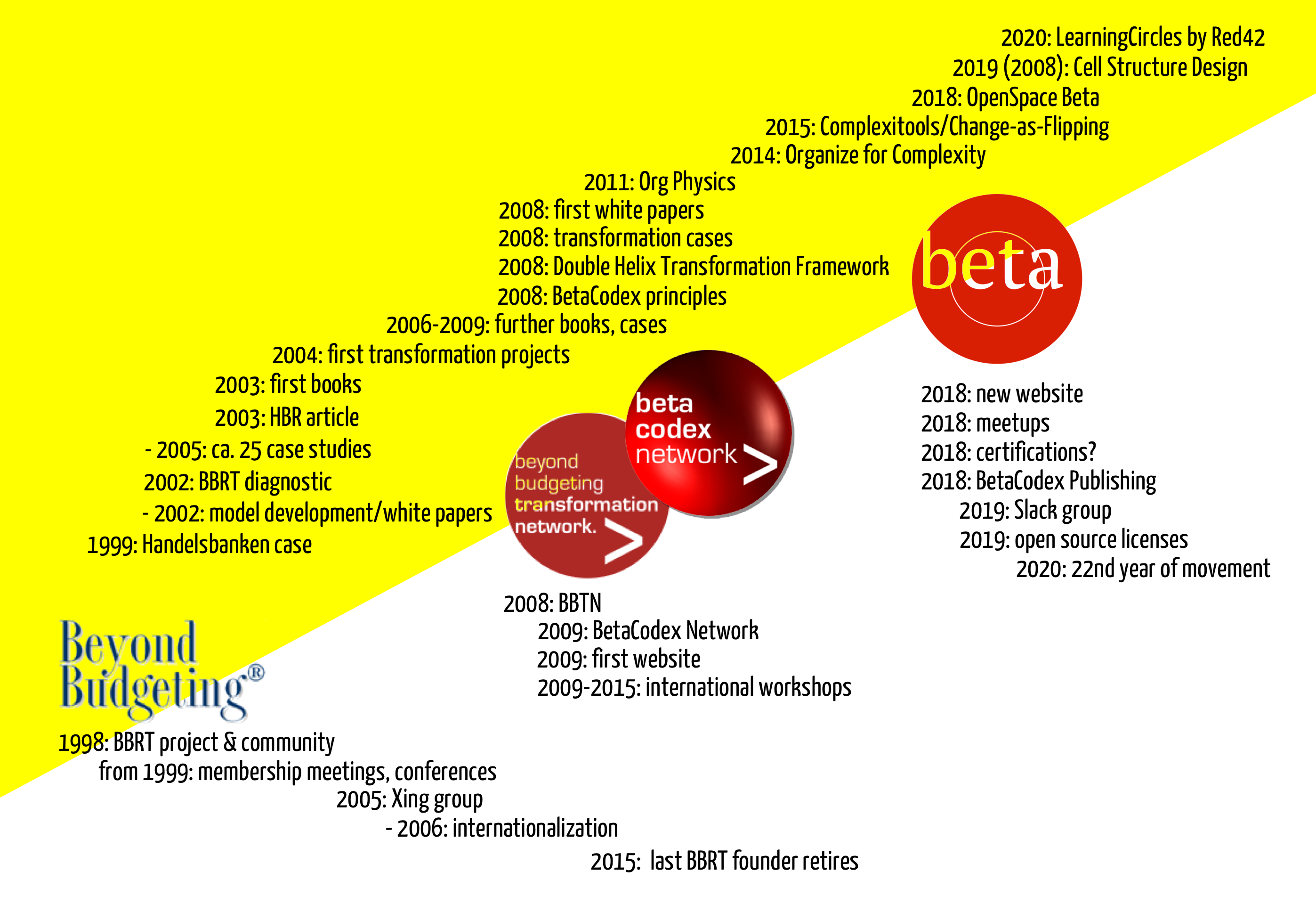 We invite you to join the movement, too!

Systems are not improved by tinkering with the parts, but by working on their interactions.
https://t.co/XBvMU3F5PY
#betacodex #organizeforcomplexity